With a greater life expectancy and an increased prevalence of type 2 diabetes, the prevalence of dementia is expected to rise (1). In order to understand the commonalities of Alzheimer’s disease and diabetes, we must have a better handle on their definitions.

Alzheimer’s disease is a progressive degenerative disease of the brain in which brain cells stop functioning, lose connections with other brain cells, and eventually die. The damage initially appears to take place in the hippocampus, the part of the brain essential in forming memories.

On the other hand, type 2 diabetes is characterized by high levels of blood glucose due to inadequate insulin production and/or insulin resistance. Insulin resistance is the inability of cells to respond to the action of insulin in transporting glucose from the bloodstream into muscle and other tissues.

So, what do they have in common?

A study of the Mayo Clinic Alzheimer Disease Patient Registry reported that greater than 80% of Alzheimer’s disease patients exhibit type 2 diabetes or abnormal blood glucose levels. Furthermore, a 2018 publication discovered that individuals with type 2 diabetes are twice as likely to develop dementia (2). These findings suggest the possibility of a linkage between the processes responsible for loss of brain and pancreatic B-cells in these disorders (3). 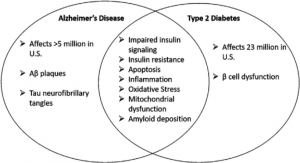 A mediterranean diet emphasizes fruits, vegetables, nuts, whole grains and olive oil while limiting red meat and other saturated fats, refined sugars and processed foods. Research has focused much of its attention on determining whether a Mediterranean diet, supplemented with olive oil or nuts, influences cognitive function.

A similarly designed study investigated 522 participants at high vascular risk with a mean age of 75. Compared to the control, participants belonging to the mediterranean diet scored significantly higher on neuropsychological tests evaluating orientation to time and place, registration, attention and calculation, recall, language, and visual construction (5).

Say “yes” to unsaturated fats and “no” to saturated and trans fats.
Look for foods high in fiber such as…

Increase your intake of vegetables, legumes, fruits, and whole grains.
Incorporate foods with anti-inflammatory properties such as…

Ensure adequate intake of the following vitamins and minerals:

(5) Aridi YS, Walker JL, Wright OR. The Association between the Mediterranean Dietary Pattern and Cognitive Health: A Systematic Review. Nutrients 2017; 9(7): 674.