Cyclic Vomiting Syndrome: What is it? 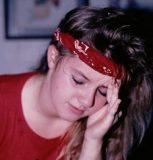 Do you know someone who has unexplained, severe episodes of vomiting?

Is the person well between episodes? <br>
The cause may very well be Cyclic Vomiting Syndrome.

Cyclic Vomiting Syndrome (CVS) is an unexplained functional digestive disorder striking both children and adults. CVS is characterized by recurrent, prolonged attacks of severe nausea, vomiting and abdominal pain. The duration of vomiting episodes lasts from hours to days and is separated by periods of completely normal health. There is no apparent cause of the vomiting and results of laboratory, radiographic, and endoscopic tests are negative. If left untreated, episodes resolve spontaneously. Associated symptoms can include nausea, abdominal pain, headache, motion sickness, photophobia, and lethargy.

Cyclic vomiting syndrome is generally considered to be a variant of migraines, which are severe headaches often associated with pain, nausea, vomiting, and extreme sensitivity to light and sound. Many people with cyclic vomiting syndrome have a family history of migraines, and attacks of nausea and vomiting may be replaced by migraine headaches as an affected person gets older.

The exact prevalence of cyclic vomiting syndrome is unknown; estimates range from 4 to 2,000 per 100,000 children. The condition is diagnosed less commonly in adults, although recent studies suggest that the condition could be as common in adults as in children.

Several changes in mitochondrial DNA have been associated with cyclic vomiting syndrome. Some of these changes alter single DNA building blocks (nucleotides), whereas others rearrange larger segments of mitochondrial DNA. These changes likely impair the ability of mitochondria to produce energy. Defects in energy production may lead to symptoms during periods when the body requires more energy, such as when the immune system is fighting an infection. However, it remains unclear how changes in mitochondrial function are related to recurrent episodes of nausea and vomiting.