2018 Research Findings on CoQ10: Benefits on Heart and Skin Health 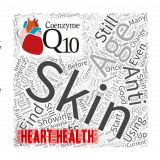 Coenzyme Q10 (CoQ10) is a powerful antioxidant found in every cell of our body. It is necessary for the production of cellular energy, which is essential for every single process of life. Ubiquinol is the active form of CoQ10.

From 2007 to 2012, CoQ10 use increased from 574,000 to over 3 million US adults (1). As one of the most commonly used dietary supplements in the United States, CoQ10 has been studied extensively for the prevention and treatment of chronic conditions and diseases (1). 2018 publications have added to our repertoire of CoQ10 knowledge, suggesting its role in promoting cardiovascular health.

“Heart failure is a complex clinical syndrome that results in an inadequate cardiac output and reduced ejection capacity due to serious structural or functional abnormalities of the heart,” (2). Millions of people are diagnosed with heart failure worldwide every year (2).

Prior to the release of the 2018 publications, research has suggested that CoQ10 supplementation increases CoQ10 levels in plasma, platelets, and white blood cells (2). To investigate and further validate the beneficial role of CoQ10 on heart disease management, a 2018 systematic review was conducted. The literature suggests CoQ10 supplementation in patients with heart failure not only improved functional capacity, but also significantly reduced cardiovascular events and mortality (1).

Additionally, a 12-year follow-up study found that those who supplemented with selenium and CoQ10 had a significantly reduced cardiovascular mortality risk of more than 40%, and a significant risk reduction in those with hypertension, ischemic heart disease, impaired cardiac function, and diabetes (3).

CoQ10 can be found in your diet from foods such as beef, chicken, peanuts, oranges, strawberries, broccoli and cauliflower. Alternatively, you can supplement your diet with epic4health’s bioenhanced and easily absorbed CoQ10.

Not only can CoQ10 be found in a variety of foods and dietary supplements, but also in skincare products, such as Derma Q-Gel®!

In addition to its role in heart disease management, CoQ10 acts as an anti-aging and anti-wrinkle agent due to its insolubility and poor permeability (4).

Due to its direct contact with the environment, skin cells are constantly involved in tissue regeneration and repair, which require high amounts of energy and a well-regulated cellular metabolism (5). With increasing age, however, energy production and mitochondrial activity decline which results in the well-known signs of skin aging, such as the appearance of wrinkles and lines, as well as loss of elasticity (5).

During the process of energy production, CoQ10 is converted into its reduced form, known as ubiquinol (Q10), which protects mitochondria, lipid membranes, lipoproteins, and also DNA from oxidative damage. In skin, Q10 levels decline with increasing age as well as UV-irradiation exposure. With this in mind, Knott and colleagues (2015) investigated whether human skin may benefit from a topical Q10 treatment. Their findings suggest that topical Q10 treatment is effective in replenishing Q10 and enhancing cellular energy metabolism and antioxidant effects (5).

A more recent publication aimed to improve skin permeability by creating an oil-in-water nanoemulsion. This nanoemulsion was formulated to serve as an efficient vehicle for delivering CoQ10 through the skin barriers. CoQ10 nanoemulsions successfully reduced skin wrinkles and created a smoother skin appearance. With that being said, this study suggests the potential use of CoQ10 nanoemulsions as a method for enhancing solubility and permeability of CoQ10 and thus improving its anti-wrinkle efficiency (4).

Curious to learn about CoQ10 and its role in the treatment of mitochondrial diseases? Find out by visiting our blog!